Neutron L3 Agent / What is it and how does it work?

Neutron has an API extension to allow administrators and tenants to create "routers" that connect to L2 networks. Known as the "neutron-l3-agent", it uses the Linux IP stack and iptables to perform L3 forwarding and NAT. In order to support multiple routers with potentially overlapping IP addresses, neutron-l3-agent defaults to using Linux network namespaces to provide isolated forwarding contexts. Like the DHCP namespaces that exist for every network defined in Neutron, each router will have its own namespace with a name based on its UUID.

While deploying instances using provider networks is suitable in many cases, there is a limit to the scalability of such environments. Multiple flat networks require corresponding bridge interfaces, and using VLANs may require manual switch and gateway configuration. All routing is handled by an upstream routing device such as a router or firewall, and said device may also be responsible for NAT as well. Any benefits are quickly outweighed by manual control and configuration processes.

Using the neutron-l3-agent allows admins and tenants to create routers that handle routing between directly-connected LAN interfaces (usually tenant networks, GRE or VLAN) and a single WAN interface (usually a FLAT or VLAN provider network). While it is possible to leverage a single bridge for this purpose (as is often the documented solution), the ability to use already-existing provider networks is my preferred solution.

One of the limitations of strictly using provider networks to provide connectivity to instances is that a method to provide public connectivity directly to instances must be handled by a device outside of Neutron's control. In the previous walkthoughs, the Cisco ASA in the environment handled both 1:1 static NAT and a many-to-one PAT for outbound connectivity.

In nova-networking, the concept of a "floating ip" is best understood as a 1:1 NAT translation that could be modified on-the-fly and "float" between instances. The IP address used as the floating IP was an address in the same L2 domain as the bridge of the hypervisors (or something routed to the hypervisor.) Assuming multi_host was true, an iptables SNAT/DNAT rule was created on the hypervisor hosting the instance. If the user wanted to reassociate the floating IP with another instance, the rule was removed and reapplied on the appropriate hypervisor using the same floating IP and the newly-associated instance address. Instance IPs never changed - only NAT rules.

Neutron's implementation of floating IPs differs greatly from nova-networks, but retains many of the same concepts and functionality. Neutron routers are created that serve as the gateway for instances and are scheduled to a node running neutron-l3-agent. Rather than manipulating iptables on the hypervisors themselves, iptables in the router namespace is modified to perform the appropriate NAT translations. The floating IPs themselves are procured from the provider network that is providing the router with its public connectivity. This means floating IPs are limited to the same L3 network as the router's WAN IP address.

A logical representation of this concept can be seen below: 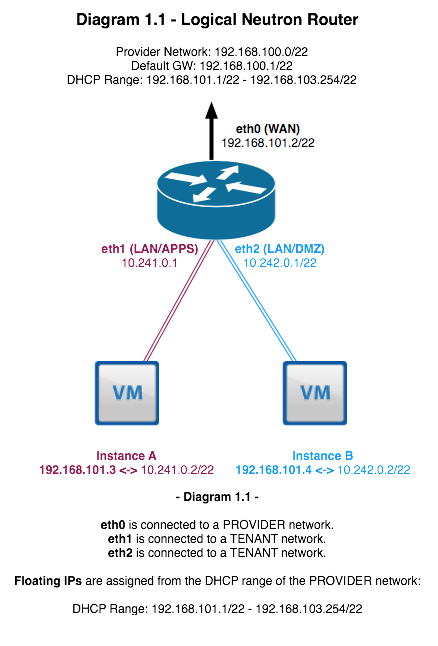 While logically it appears that floating IPs are associated directly with instances, in reality a floating IP is associated with a Neutron port. Other port associations include:

A port is associated with the instance indicated by the "device_id" field of the "port-show" command:

For this installment, a Cisco ASA 5510 will once again serve as the lead gateway device. In fact, I’ll be building upon the configuration already in place from the flat and/or VLAN networking demonstration in the previous installments:

10.240.0.0/24 will continue to serve as the management network for hosts. A single VLAN network will be created to demonstrate the ability to use either a flat or VLAN network.

A single interface on the servers will be used for both management and provider network connectivity. Neutron works with Open vSwitch to build peer-to-peer tunnels between hosts that serve to carry encapsulated tenant network traffic. Before you can utilize the L3 agent, there are a couple of configuration options that must be added or edited. These include specifying the external bridge and external network in l3_agent.ini. There are some caveats to the L3 agent you should be aware of:

Changes to a standard Rackspace Private Cloud deployment are handled by Chef. Using the 'knife' utility, add the following override attribute to the environment file:

Run chef-client on the controller/network node to update the configuration. Chef will update /etc/neutron/l3_agent.ini with the following entry:

Setting the bridge to null results in the router gateway interface being placed in the OVS bridge specified in the provider network.

Networking / Building a router in Neutron

With the L3 agent properly configured, it's now time to build a router in Neutron. The configuration will mirror that of the diagram below, and assume a tagged VLAN provider network of 192.168.100.0/22 exists:

A router can be created with the 'router-create' command:

With the router created, it’s time to set the external gateway.

With the gateway set, it should be possible to ping at least the network gateway from the router namespace, and possibly an Internet address if upstream routing and NAT is properly configured:

Upstream NAT for the router IP is important, since all traffic from an instance without a floating IP will be SNAT'd by the Neutron router. A dynamic NAT has been configured on the Cisco ASA in this example.

Below are two tenant networks I've created. Note that it is no longer necessary to implement the default route workaround as documented in prior releases and walkthroughs, as the Neutron router will serve as the gateway and provide connectivty to the metadata service.

Attaching the networks to the router can be accomplished with the 'router-interface-add' command:

A look into OVS shows that all three router interfaces are in the integration bridge and adhere to OVS flow rules:

To test connectivty I will spin up two instances - one per network.

Because these instances are behind a Neutron router and are without floating IPs, there is no direct connectivity to them outside of the corresponding router or DHCP namespace or a multi-homed instance. You can confirm successful DHCP and metadata communication via the console-log, however: 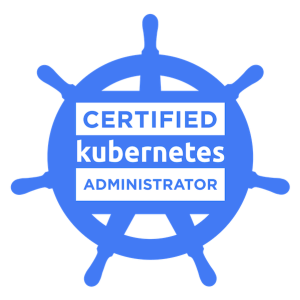