The Openvswitch installed on a Linux system provides the feature to configure multiple bridges. Multiple OVS bridges behave like independent local switches. This is the way OVS is providing switch virtualization.

It is possible to chain multiple OVS bridges on one system. Chaining multiple bridges is used by Openstack neutron, when using the default networking setup. 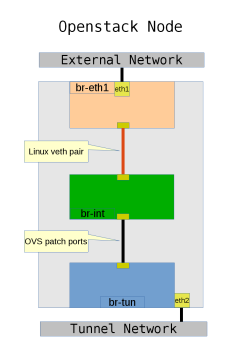 One question is now: What is the performance loss, if multiple OVS bridges are chained using OVS patch ports or Linux veth pairs?

In a previous article (Switching Performance – Connecting Linux Network Namespaces) I showed the performance of different methods to interconnect linux namespaces. The same procedure will be used to check the performance of chained Openvswitch bridges.

Two Linux network namespaces with attached ip interfaces will be used as the source and destination of traffic. The test tool used is iperf, using a different number of threads. TSO and other offloading features of the virtual nic will be switched on and off.  A setup with three OVS bridges is shown in the drawing below. 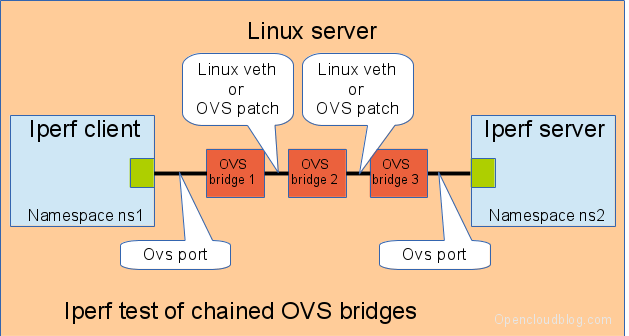 The OVS patch ports between the bridges are created using the following commands:

The Linux veth pairs between the bridges are created using the following commands:


It must be ensured, that there are no iptables rule active when running tests using veth pairs.

The chart shows, that the OVS using OVS patch ports behaves well. When one iperf thread is running in each namespace, this consumes 1.8 CPU cores, 1.0 for the sender side and 0.8 for the receiver side. The four cpu cores are running at 100% usage, when using four or more threads. The throughput is independent (within the measurement precision) from the number of chained OVS bridges, at least up to the tested 8.

Connecting OVS bridges using veth pairs behaves quite different. The numbers for two bridges are showing a performance loss of 10% when running with one or two iperf threads. When using more threads, the veths behave very bad. This might be a result of not having enough CPU cores, but compared to the OVS patch port, these numbers are very bad.

I’m looking for servers providing more CPU cores and sockets to run the tests on single and dual socket Xeons (16 or 20 cores including hyperthreading per socket). But I have no access to such systems.

My conclusion from the test is:

Openstack Neutron Juno is using the veths method for the Hybrid driver.